In 2005, Grand Valley Local School District in Orwell, OH, embarked on a construction project that consolidated three elementary schools, one middle school and one high school into a single 244,000-square-foot pre-K-12 facility. At the time, John Dolan served on the school board and played a role in selecting exterior and interior finishes, including nora® premium rubber flooring, which covers classrooms, corridors, locker and weight rooms, stairwells and the cafeteria.

“During the process of picking the different materials, we addressed each area, and one of the key areas was the floors in the building,” he recalls. “Putting in a rubber floor was definitely a good decision.” Members of the school staff agree, for a variety of reasons. Just ask Tim Carlson, band director at Grand Valley. Carlson’s classroom is a band room during the day but hosts an assortment of activities during off-school hours. In fact, Paul Byler, director of operations, buildings and grounds for the district, describes it as “probably the most abused floor in our entire building.”

Says Carlson, “Because of all those activities, the durability of the floor is very important. For marching band, we go through a couple of doors that exit that room. When we’re done, we’re coming back in, bringing sleet, water, gravel, grass, mud—all kinds of things with us. This floor cleans up very well. It doesn’t even look like it’s ever seen anything like that.”

According to Carlson, the floor’s sound attenuation properties are also important throughout the building. “Improved acoustics are a big part of students’ everyday learning,” he says. Byler agrees, adding, “Another big difference I’ve seen with nora flooring is echoing in hallways during class changes and lockers banging. It’s made a huge difference, even as maintenance workers move items from one place to another in the hallways. They’re not interrupting classes with that clanging and banging.”

Byler has also noticed an improvement in indoor air quality. “Using the nora pro clean® system and combining that with the microfiber use, we see a huge difference in our HVAC system, which is much healthier. We’re not trapping all that dust and particles in our air filters, which then don’t get back into the classrooms.”

“When the air conditioning comes on,” says Carlson, “and more air flows through, there are no particles in the air. It seems really clear. The kids are able to breathe deeply while they play their instruments…It all adds up to a much richer experience.”

For district superintendent, William Nye, cleaner air means improved attendance. “I know this environment here is way more conducive to optimum air quality than the older school. I’m sure there’s some data out there that show it would increase attendance…A clean environment is always key to a good school system, good classrooms and a good, quality education.”

Keeping Grand Valley Schools clean is much easier thanks to nora premium rubber flooring. Says Byler, “In our old facilities, we had five separate buildings. The flooring was made up of everything from terrazzo to wood and VCT tiles. We were maintaining them with a lot of stripping, waxing and sanding. It was a very tedious and messy job, to say the least.”

The introduction of rubber flooring brought with it a new, much simpler maintenance regimen. “We had to throw out everything we knew in the past as far as taking care of floors and wrap our heads around a whole new process. Over time, I actually got thank you letters from some of the staff for making their jobs so much easier.”

One of those staff members, Deann Wendell, elementary custodian, says, “nora flooring has made it easier for us to maintain the floors. We use plain water to clean them, so we’re not into the chemicals, which makes us healthier. The floors always have a nice shine without waxing them.”

Mary Battaglia, high school custodian, echoes Deann’s remarks, “You’re not putting sealer down, you’re not putting wax down and you don’t have to put the smelly stripper down. We’re not into smelly chemicals to clean it; we’re just using plain water. So, definitely, nora floors are the way to go, because they have a constant shine without any effort.” She adds, “It gives us so much time because we’re not spending time sealing and waxing and waiting for it to dry. Now we can focus our time in doing a thorough job in our other cleaning.“

The custodians also notice the comfort underfoot nora flooring provides. Says Wendell, “I am not exhausted when I go home. We do put a lot of miles on our feet per day. Generally, four hours into my shift I’ve already hit 10,000 steps, so a day here at Grand Valley can very often be two to two-and-a-half days of normal stepping for most people. There are some sections here at Grand Valley that have another type of flooring, and it’s very hard on my legs when I’m in the area, so I’m a real advocate for the nora flooring.”

Comments like these help explain Byler’s observations regarding workers’ compensation claims. “Since I’ve taken over as director, I’ve noticed that I have not had to do any reports for workers’ comp claims due to our floor maintenance.”

Nye can vouch for Byler’s observations, “Operating costs for the flooring system have come down compared to previous floor systems. There are fewer chemicals and less labor involved in cleaning the floor. Workplace injury is almost nonexistent, where with some of those older floor systems, we had back injuries associated with maintaining the floor.”

Nye also points to slip resistance as an important benefit rubber flooring provides. “It’s huge. First of all, elementary-aged kids are always skipping, running and hopping, and you don’t want a system that allows any kind of slipping that goes on. So, slip resistance is key. Athletics often use the hallways to run and exercise in. We even have walking clubs in the facility that walk all over the floor and do all kinds of exercise. So, again, slip resistance is key. We don’t want people getting hurt.”

Just as importantly, the floors look great, even 12 years after they were installed. “They look as new today as they did when they were installed,” says Nye. “I get that comment all the time. ‘Your facility looks great; your floors are awesome.’ That’s one of the first things people look at—the floors. Ours sparkle every time.”

Wendell reports similar experiences. “We are constantly getting compliments about the condition of our floor,” she says. “People are amazed that we have been in our building for over 12 years and we have the shine that we still have.”

Perhaps Byler sums it up best when he says, “I would say to someone who’s looking at putting in new [rubber] flooring, take the time, go visit someone who has it already. I think you’ll find that there’s really no other flooring option out there.” He adds, “Rubber flooring is really a no-brainer. It seems as though you’re not doing something right because it’s just too easy.” 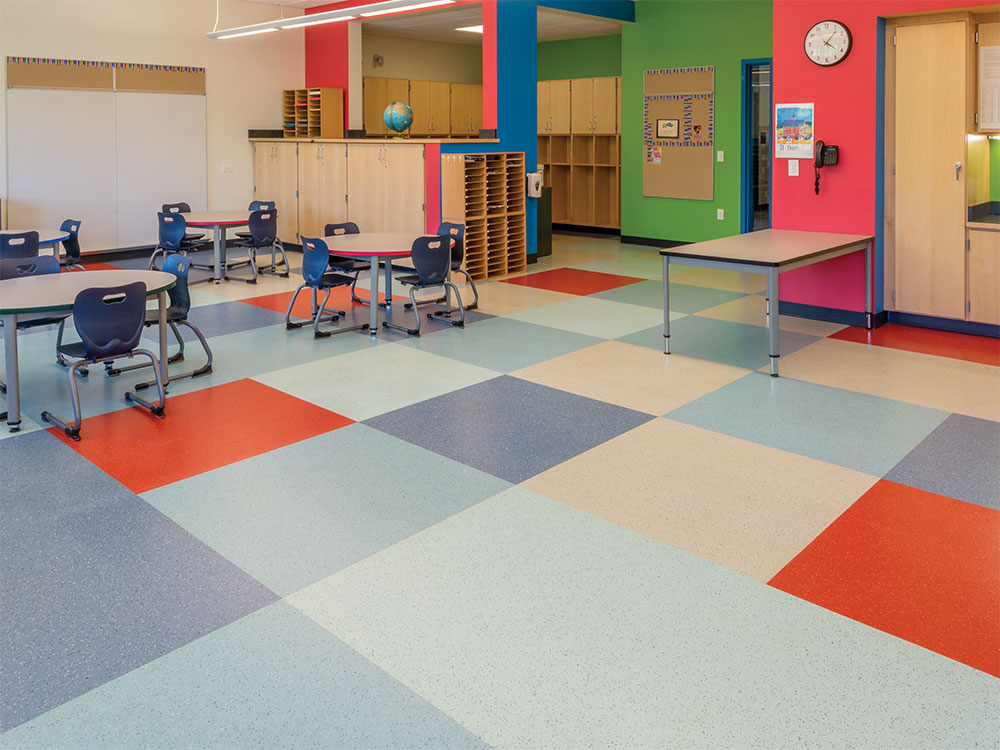 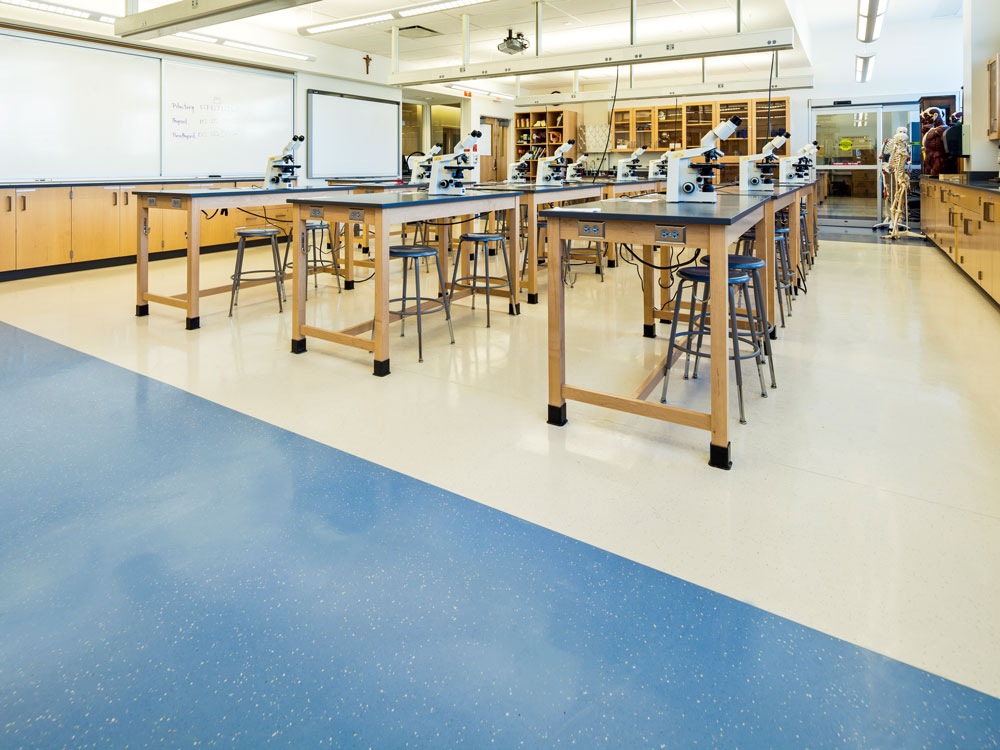 Outfit labs and other areas of a new science building with a floor covering that’s resistant to chemical spills, can withstand high foot traffic and reduces the use of toxic cleaners as part of routine maintenance, while contributing to LEED® Gold certification.