A building provides hope: The Barenboim-Said Academy launched its teaching activities in the heart of Berlin in October 2016. Up to 100 young scholarship holders from the Middle Eastern conflict region can now enjoy a three-year musical education in the former stage-set warehouse of the Berlin State Opera, accompanied by a general studies program in the history of music. Daniel Barenboim has taken on the educational and musical directorship of the academy. The idea for the academy goes back to the success story of the West-Eastern Divan Orchestra, which Barenboim founded together with the American-Palestinian literary scholar Edward Said in Weimar in 1999. The ensemble consists of young Israeli and Arab musicians who make music together as a personal statement for peaceful coexistence. The students at the Barenboim-Said Academy learn and practice on a shared floor: the ecological rubber floor noraplan® uni from nora systems.

The new music academy has a total of 21 practice rooms, an auditorium, offices and a concert hall with more than 600 seats. The publicly accessible foyer, featuring a cafeteria and exhibitions, invites people to meet and mingle. When it came to selecting the flooring, the architects and building owner chose nora® rubber floor coverings. In addition to their resilience and the option of customizing the flooring with a desired special color, there was another decisive aspect: The floors were installed according to nora system blue® – the world’s only floor covering system that offers floor covering, installation materials and installers as an emission- tested, certified overall concept.

Since rubber floor coverings from nora systems have always been free of plasticizers and halogens, they have been sporting the environmental label “Der Blaue Engel…weil emissionsarm” (the Blue Angel...because of low emissions) for years now. However, nora system blue® goes one step further, combining low-emission nora® rubber floor coverings with low-emission installation materials. Harmful interactions between the individual components have thus been eliminated. Selected installers are also specially trained to work with nora system blue®. As each system module guarantees maximum safety, the system as a whole has also been certified by TÜV Rheinland.

“For us, environmental impact, the durability of the floors and the safety of the system were very important,” say architect Heiko Klement, of rw+ Gesellschaft von Architekten mbH, and Dr. Carsten Siebert, CFO/COO of the Barenboim-Said Foundation, explaining their decision. After all, both the students and the staff at the academy spend a great part of their day in the rooms. “The indoor air quality is thus crucial for their well-being.”

According to the builder owners and architects, noraplan ® uni rubber floor suits the building perfectly. The existing building dates from the period following the Second World War and consists of very different materials – from sandstone to rubble brick through to reinforced concrete. Several elements of the former stage-set warehouse, such as the steel beams, the banister, the open ceiling structure and the mobile transport platform are heritage-protected and have thus been preserved. The new users find it rather congenial that the building is a bit quirky and not quite symmetrical. To ensure good room acoustics, wall surfaces in rooms where music is being made should not be completely parallel. Otherwise there would be unfavorable acoustic refractions.

The shade of the floors is a custom production from nora systems: “The floor color emphasizes the structure of the rooms and highlights the building’s industrial look in a discreet and low-key manner,” explains Klement. “The brownish-red shade is reminiscent of anti-rust paints, creating an attractive contrast to the whitewashed walls.” The matte surface of the rubber floor coverings also appealed to those in charge.

Another advantage of nora® floor coverings is their resilience. Their extremely dense, non-porous surface makes them highlydurable. “Wear-resistance was also an important aspect for us. After all, we will be holding more than 100 concerts per year at the academy and so welcoming a lot of visitors. The foyer will also be permanently accessible as a meeting place,” adds Siebert. Thanks to their non-porous surface, nora® floors require no coatings, making them extremely easy to clean. Their permanent elasticity also makes them particularly comfortable. “Rubber is a good material – environmentally-friendly, ergonomic, warm and welcoming,” say the builder owners and architects, summing up their impressions. This lays the ideal foundation for successful musical interactions between the young musicians. 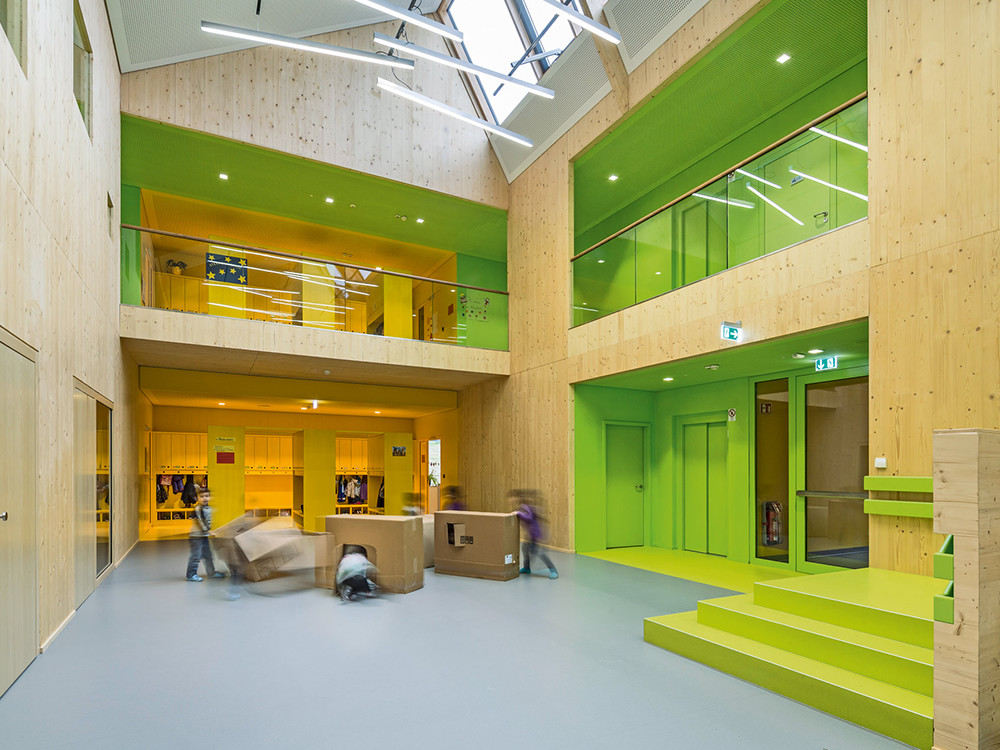 Affordable yet environmentally friendly and sustainable: The Röntgenstraße Day Care Center in Völklingenshows that economy and ecology are not contradictionsin terms.

You will find more suitable content on the following page:
www.nora.com/united-states/en/project-references/education/de/berlin_barenboim-said-akademie